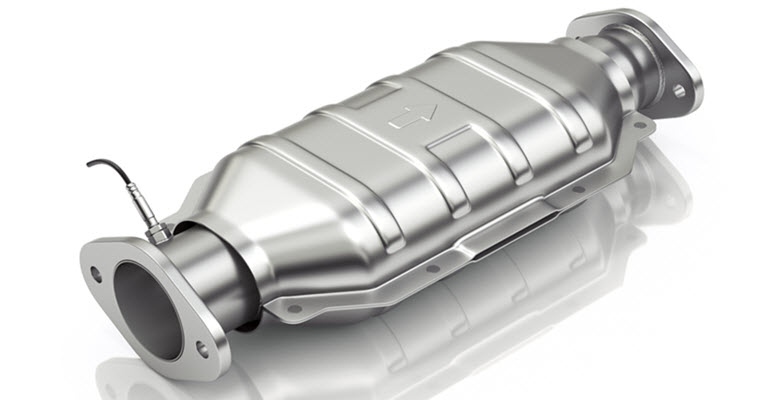 Symptoms of a Clogged Catalytic Converter in a Mercedes-Benz

Mercedes-Benz is a car manufacturer with a long history and a large fan base to match. With such gorgeous designs and reliably-intelligent innovations, it’s not hard to see why drivers flock to this brand. Impressing drivers time and again, and always improving on what had been thought to be perfection, Mercedes is able to produce stunning cars with incredible driving capabilities.

However, one thing that can definitely ruin an amazing driving experience is part failure. Your drive becomes frustrating, unpleasant, or outright dangerous. Parts failure is always best avoided by routine maintenance and servicing standards. Of course, things can happen even with the best laid plans. With this in mind, we’ll be taking a closer look at issues caused by a clogged catalytic converter and discuss what causes the converter to fail in the first place.

What is a catalytic converter?

Inserted in to the exhaust system, this metal canister is filled with a chemical catalysts, most commonly a mixture of platinum and palladium, which it uses to convert harmful emissions from the combustion process into safer, less harmful gasses, which are then emitted by the exhaust. Put simply, you have a little chemical lab in the exhaust of your Mercedes, and you probably never even knew about it.

Why can a catalytic converter become clogged?

There are two main reasons why your catalytic converter can become clogged: contaminants or overheating. Starting with the former, contaminants can cause your converter to become blocked if they are able to leak into engine system. Contaminants that are likely to this include engine coolant and engine oil, which are typically able to enter the engine because of a faulty cylinder head gasket or damages or breaks to the seals and rings around the engine. When this happens, while the engine may be able to function through the contamination, the catalytic converter then has to deal with highly-contaminated emissions that have been created as a result. The contaminants can be heavier or less reactive to the conversion process and can instead settle inside the converter unit and clog it up.

Misfiring, as well as an engine that is running rich, can also cause clogs in your Mercedes’ catalytic converter. When your engine is described as running rich, it means that there is more fuel that necessary inside the engine when compared with the amount of air. Too much air over fuel in the engine is referred to as running lean. To ignite properly, the air and fuel should instead be perfectly balanced. Therefore, if your engine is running too rich, a fuel-based misfire is likely to occur, as the fuel is unable to be ignited by the spark plugs. Misfires of this kind can cause surges of heat or overall the fuel to be burnt much hotter than normal. The catalytic converter is then sent these super hot exhaust gases, which can cause the chemicals inside the converter to start to melt, certainly lowering performance and potentially causing clogs.

Symptoms of a Bad Catalytic Converter

When a catalytic converter starts to fail, such as when clogs occur, deterioration can happen quite quickly. As with many cars, accessing the converter can be difficult. This is typically to prevent theft, as the elements found inside the converter are quite valuable. It can be hard to tell if you have an issue. Therefore, if you notice any of the symptoms listed below, it is best to err on the side of caution and seek professional diagnostics:

Your catalytic converter is integral to the safety of your Mercedes for both you and those around you. Mercedes owners should never delay in seeking repairs. Luckily, if you are a Mercedes driver living in or around North Chelmsford, Chelmsford, Drycut, Tyngsborough, Westford, or Lowell, MA, Mechanics Direct is on hand to help. Our friendly team of experienced mechanics are certain to put your mind at ease. Our repairs are sure to be quick and affordable for you, too.