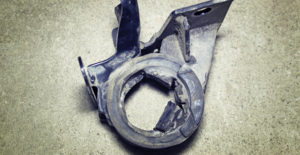 Over the decades, the Mercedes manufacturer has ensured that their vehicles continue to offer near-perfect performance by constantly improving their engines. This continuous improvement has lead to the popularity of their vehicle all over the world. With the quality of engineering that goes into their engine designs, you might think that they don’t develop any problems. However, like many other vehicles, Mercedes engines do develop issues. Some of these issues occur in the smaller components that make the engine run smoothly, such as the engine mount.

The engine mount is the component that is responsible for ensuring that the engine is firmly held down within the engine compartment. The engine mount also helps prevent the engine from being in direct contact with the body of the car. This metal to metal contact can easily create friction. However, the important rubber mount reduces this friction.

The engine mount is also responsible for ensuring that the vibrations that are produced in the engine as it runs are significantly minimized. These normal vibrations are usually as a result of the constantly-moving components within the engine.

Engine mount failure can be brought on by a number of issues. The main cause of engine mount failure is the inevitable wear over time that compromises the quality of the rubber mount. While this tends to happen after covering several hundred thousand miles, the process can be hastened by poor driving and temperature changes in the engine compartment. Excessive expansion and contraction can cause the rubber mount to dry out and become brittle. This will cause cracks to develop in the rubber and compromise its functionality.

Unusual noises in the engine compartment

When the engine mount is faulty, the engine will knock against the body of the car as the car moves. These noises range from rattling and clanking noises to low squeaks, depending on the damage to the engine mount. When the noises are minimal, chances are that the engine mount has only started to fail. Louder noises point to larger faults that cause the engine to shift around in the cabin when driving.

Excessive vibrations from the engine

These are often felt when starting the car or when reversing. The jerking motion may also be felt when the car accelerates or decelerates. The sudden movement will cause the vehicle to slightly lunge in response to the change in the speed at which the engine is running.

How to Fix Engine Mount Malfunction

The engine mount in any vehicle has to be replaced after a period of time. This means that when it develops faults, the only solution is to replace it.

Replacing an engine mount is not a difficult task. In fact, buying the replacement part is very easy. The process of replacing the part is what causes many owners to worry, as it is a labor-intensive activity. This is why you should only let a professional mechanic take a look at your car as soon as you suspect an engine mount malfunction so they can replace it properly. 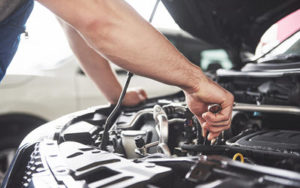 Mechanics Direct has decades of experience in dealing with European vehicle models, including the Mercedes. We are located in and around North Chelmsford, Chelmsford, Drycut, Tyngsborough, Westford, and Lowell, MA. We take pride in providing superior services to our customers. Call us today for an appointment at your earliest convenience.